One Third Hangzhou Gets Sweet with Robe

Hangzhou is the capital of the Zhejiang province on China’s eastern seaboard, and considered one of the country’s most prosperous areas. Its diverse nightlife scene has just been further enriched with the opening of a brand new One Third club destination, another of the NOA’s Arc Group’s premium entertainment ventures.

At the heart of designing the stunning lighting and visuals associated with the One Third identity is creative director Daan Oomen and his team from Netherlands-based Live Legends. They specified nearly 250 Robe moving lights to ensure One Third Hangzhou stands out in a competitive marketplace!

One Third Hangzhou is the third family member to be rolled out after OT-Kunming earlier in the year, a process that started with the launch of ‘mother brand’ One Third in Beijing.

The One Third vibe is all about the story of an old locomotive factory that comes to life.

Live Legends delivered all creative elements from concept to execution, including show production, interior and technical design which included co-ordinating all the visual disciplines and optimising the guest experience with their usual flair and imagination.

With the One Third identity built on quality and reflecting a ‘gold standard’ in clubbing, Live Legends was asked onboard, to bring their extensive skills, knowledge and visions from the world of live events. Having a ‘named’ European manufacturer associated with the main lighting fixtures is essential to the One Third brand architecture.

The 2500 capacity club’s multi-layered main room design features a large balcony / with industrial style first-floor runways on the long sides. There is a mezzanine and 12 sizable VIP rooms. The main hall can host 2000 people for a standard club night, and the full capacity should they decide on a concert setup.

The inspirations for the lighting design were maintaining a continuity with the One Third narrative – lively, fun, energetic – and it needed to integrate with all the other visual aspects as well as being powerful, innovative and unique.

Daan and senior LD Serge Patist chose to work with so many Robe fixtures because they were bang-on for getting the desired effects and because of their power, durability and impact.

The T1s are used for specials on the DJs and live acts appearing onstage, selected for their adaptability, good shuttering and excellent zoom.

As the Spikie wall is a signature design element of the One Third brand, they wanted to integrate this iconic piece into the Hangzhou set, but differently and in an upgraded version. To make it more dynamic and eye-catching, the wall became a triangle.

The 210 Spikies make up one side of a hi-impact triangular-shaped rotating wall, which has LED panels mirrored on the reverse and can be flipped back and forth as the evening gets going.

The VIVAs are dotted around in the whole room, most on tracking beams. A U-shaped structural automation system in the main room transforms it into a train wagon-like space as the atmosphere ramps and the evening unfolds, carrying people into a great adventure.

The club is on the site of a former train station serving the Xiacheng area, which was demolished in summer 1997 as the capacity could barely cope with predicted future demands, so a new one was constructed instead.

A few years later, the local government instructed an architect to produce plans to reconstruct the whole area, retaining some elements of the old train station. The actual One Third building was an ancient foundry, which Live Legends turned into an old train factory for their narrative.

VIVAs are used for gobos and beam effects – those big all-embracing looks that can air-lift a room of people into another stratosphere. “We actually wanted to step away from the beamier club looks and the VIVAs give plenty of options on that,” explained Daan.

These fixtures were also all selected for their strong LED lightsources.

Around 3km of RGBW LED strip is integrated into the lighting design mainly accentuating the shape of the room, with 300 small LED lights to illuminate the décor, plus around 400 1-cell blinders.

LED screens extend the physical décor pieces, and these ‘windows’ enable the audience to be transported into a succession of other worlds.

Lighting is controlled by grandMA2, video via a disguise server and there is also a laser system with Pangolin control. All these plus the motion controller are integrated into a series of timecoded visual showcases that play out throughout the whole environment.

As with almost every Chinese club, the main room is filled with VIP tables as opposed to being an open dancefloor, however here the mid-section can be removed to create a full dancefloor / standing area.

There were several aspects of continuity with the original One Third Beijing installation, but One Third Hangzhou is much larger and more ambitious in scale, with enhanced technical features to WOW the crowds.

The Live Legends team’s delivery schedule included providing comprehensive training for all the house technical crew who look after everything day to day.

It’s intended that One Third Hangzhou will be another landmark for the city which has been awarded the 2022 Asian Games, is an emerging technology hub, home to e-commerce giant Alibaba and that hosted the 11th G20 Summit in 2016!

Live Legends is also expanding its horizons into music production and has just released its second single – the club anthem “Gone” produced for the One Third Hangzhou show set under the banner Live Legends Records.

Robe ESPRITES have joined the house lighting rig at Patronaat in Haarlem, one of the core music venues in the northern Netherlands, which features two busy halls and a café area all hosting performances, a vibrant mix of rock and pop shows, banging club nights and dynamic music-based festival events.

The Harbour Club brand is renowned in the Netherlands and around the world for its distinctive blend of quality, mouth-watering, high-end cuisine, vibrant international ambience, stunning industrial backdrops, and cool contemporary art, offering a unique dining-based experience that’s stylish and fun. 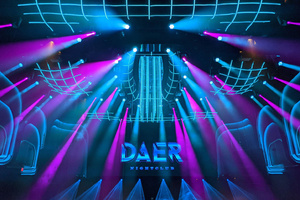